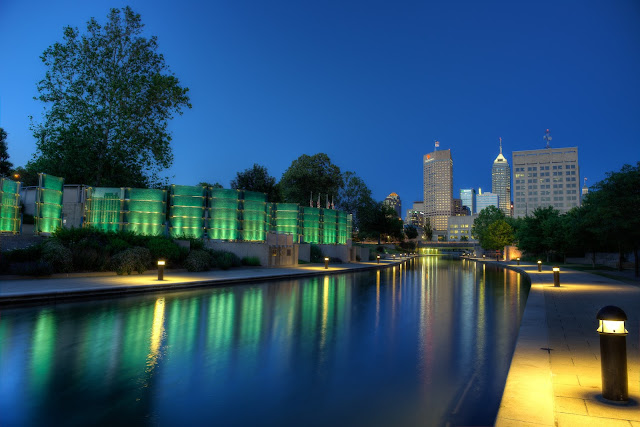 My brother, David, flew into Indy two weeks ago - he lives in Seattle. I offered to pick him up from the airport as I was going to be in the area for one of my classes at IUPUI. His flight was due in at 11:00pm on a Wednesday night and I had class from 6:00-9:15pm that night. Class was particularly interesting uneventful and exciting boring that night so I didn't stick around for the second half. Instead, I opted for a 5-10 mile hike around the westside of Indy (White River State Park, Zoo, and Canals) to eat of the time until David's plane landed. I grabbed my D800 and tripod and started walking. It was around 7:30pm. The temp was perfect and there wasn't a cloud to be seen. There were many folks biking, jogging, running, walking, kissing, doing taxes, chasing llamas, etc in the park areas. The sun was just starting to touch the horizon. I was taking dozens and dozens of pictures looking for appealing angles and views. That's when a brilliant, possibly game-changing thought came to mind.
"What if I were to take a short video clip of a particular scene and then 'fuze' a beautifully retouched image of that same exact scene into the clip?" I asked myself. I'm talking about a seamless fusion - where the video and image are perfectly aligned. So the rest of the night I did the following at each new scene.

2) Without change focal length or anything about the composition, take 7 images to be merged into an HDR.

Ok, I admit. I may have spoke in hyperbolic terms a few lines up, but it is a pretty cool little technique. Check out the video above and let me know what you think. There are 10 'fusions' in the video. The bottom line is this, I thought it would be cool to see a scene as recorded by unedited video and then gradually transition to a retouched, HDR (3 of the images are not HDR) version of the scene. It gives one an idea of how a scene can be transformed by post-editing.