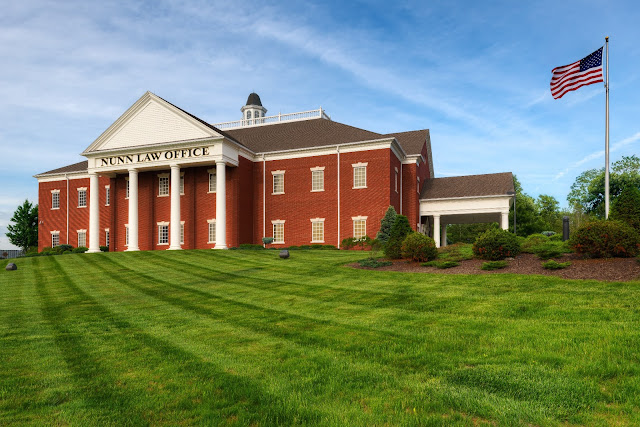 Amy (wife) and I were relaxing around the house on a Sunday evening when I received a call from a number I didn't recognize. I answered the call and Ken Nunn greeted me on the other side of the phone. HERE is a little article to introduce you to Mr. Nunn. Nearly all  who have spent any amount of time in the south/central part of Indiana knows of Ken Nunn. Needless to say, I was a little surprised that I was speaking to Mr. Nunn. As it turns out, Mr. Nunn had seen some of my work hanging in Cheddar's and wanted me to photograph his law office building (located just off HWY37 and 3rd St in Bloomington). A couple weeks after the phone call I meet with Mr. Nunn and he showed me around his building. He pointed out areas of interest (paintings, conference rooms, chandeliers, etc.) as we toured the place. I took some notes and then made plans to return to the building with my camera and tripod. This was going to be an architectural shoot, so I had to get my hands on a tilt-shift lens. While I had never used one of these lenses before, I knew their importance with respect to architecture. When shooting structures for a client it is imperative for the vertical lines to appear vertical in the image. However, traditional wide-angle lenses create distortion and cause vertical lines to converge in the image (the building looks as if it is falling away from the camera). See the comparison below. Big difference, right? It's amazing how the tilt-shift lens dramatically improves architectural photography. Lucky for me, borrowlenses.com had a Nikon 24mm f/3.5 PC-E lens available for rent (PC-E is Nikon's version of tilt-shift). Unfortunately these lenses are manual focus only. I had to put my camera in Live View mode and zoom into the image to make sure focus was perfect for every shot. I used a tripod for every single image. This forced me to be deliberate and move slowly - it's easy to miss shots when you're running around like a madman! For the interior images, I had to deal with mixed lighting from the ambient (mostly sunlight through glass doors) and incandescent from the ceiling. This lighting mixture resulted in blue and yellow/orange hues throughout the interior images. All of that had to be cleaned up in photoshop. Mixed lighting can be tricky because the white balance within the image is different depending on the type of light that is present. See the image below for before/after. After is on left, before on right. The exterior images were a little more straightforward to process (with the exception of the nighttime images) because there was only one light source present (aka. The Sun). Each of bracketed images were first compiled in Photomatix Pro and then edited in photoshop. In photoshop, I brightened the white portions of the building and removed distracting elements from the scene. Here's a before/after. The left image is the final, the right image is straight out of the camera. The nighttime images were tricky to process. The ambient light fell to a bluish hue and the lawn lights were dominantly yellow/orange. After compiling the bracketed images in Photomatix Pro, I opened the images in photoshop to correct the wacky color balance. Most of the white portions of the building were yellow orange instead of white. I had to create several layer masks (hue/saturation, curves, etc.) to correct the colors. I left a little yellow/orange hue because I thought it would look unnatural for those areas to be pure white. The before/after image is below.  The right image is straight out of the camera. That's all I have for this blog post. Hopefully it gives you a decent idea of what goes into a shoot like this. As always, feel free to comment or ask questions in the comments section below. Thanks!
Email Post
Labels: 24mm f/3.5 PC-E architectural bloomington HDR nikon d800 outdoor tilt-shift
Location: Bloomington, IN, USA