DISCLAIMER: The contents of this post only reflect my understanding of the subject matters. There are plenty of flaws in my work. I'm on a journey like every other photographer.

Soon after I received word that I would be traveling down to Huntsville, AL for work I began planning locations for landscape photography. I scoured Flickr, 500px, and a few other sites looking for picturesque views. This is a good exercise that I would recommend to anyone looking to make beautiful images in a new location. What type of images do you want to create? Landscapes, urbanscapes, sweeping vistas, bodies of water, etc.? What are other photographers photographing? Leverage the experience of the photography community to eliminate or reduce trial and error locations. Also keep in mind the season - the images you want to create may or may not be possible depending on the season.

My main goal was to capture a sunrise image and a star trail/milky way image. After a bit of research Monte Sano State Park, a little mountain range on the east side of Huntsville, looked like the best option for a sunrise image. It wasn't ideal, but decent enough. More on this later in the blog...

The star trail image required a little more planning. I have very little experience with this type of photography so I had to do some research (here's a great astrophotography resource - I love the interwebz!). I don't have an ultra wide-angle lens so after reading some astrophotography articles I decided to rent the Rokinon 14mm Ultra Wide-Angle f/2.8 from BorrowLenses. It has great reviews and is a very inexpensive alternative to the Nikon 14mm f/2.8.

I arrived in Huntsville, AL just after sunset and grabbed some dinner. After checking into the hotel, I checked out a light pollution map to find the darkest skies nearby - this is absolutely essential to capturing a killer night sky (clear skies are also vital). The stars can't compete with all of the light generated from a city. I ended driving 45 minutes southeast to Lake Guntersville State Park. This was the closest location with the darkest skies. See the screenshot below - the red star is the approximate location. 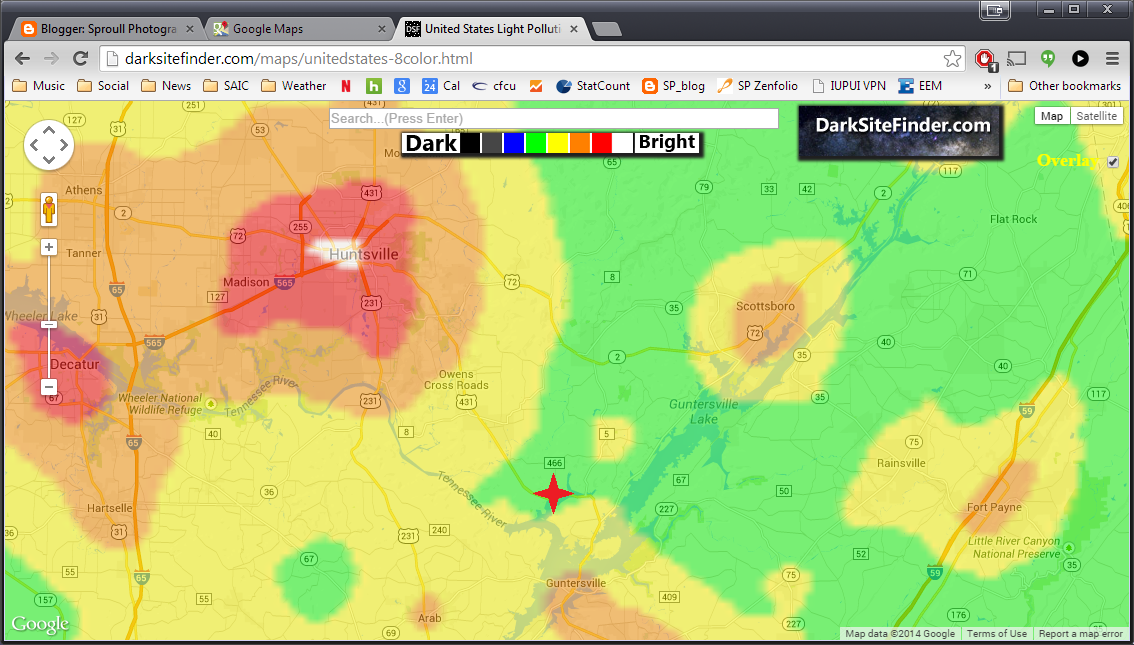 I arrived at the lake around 10:30pm and shot until 12:00am. It was just me on the shore of the lake. No boats, pedestrians, wild creatures, alligators, etc. Luckily I had a camping chair in the car. The night sky was brilliant. So clear and unobstructed. The gentle hills across the lake made for a perfect foreground to the night sky. The reflection was an unexpected bonus :) 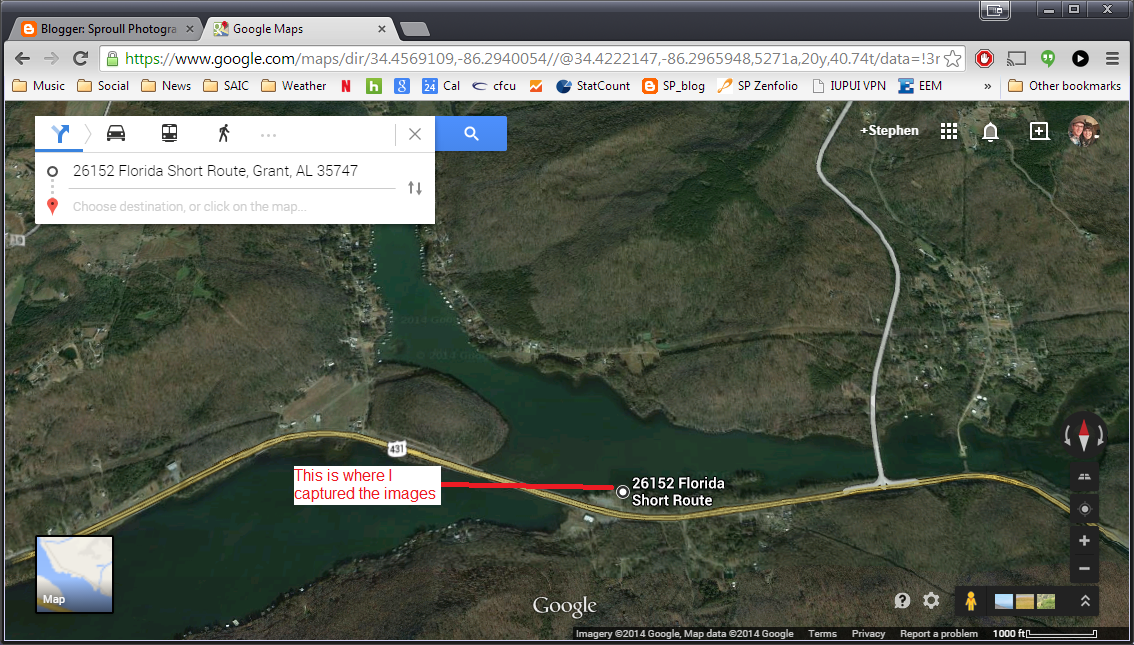 The gif below shows the sequence of all 124 images played back at 24fps - it's about 5 seconds long. The milky way isn't as bright as I was hoping it would be. Turns out the other side of the milky way (facing southern skies) is a bit brighter with more texture. To capture these images, I took a 30 second exposure every second for an hour. The opening image at the top of the blog was created by opening all 124 images in photoshop as separate layers and changing the blend style to "lighten" for all the layers except the bottom one and that combines the brightest portions of all 124 images. The result is a fantastic swirl of stars trails rotating about the North Star! Pretty cool, eh? 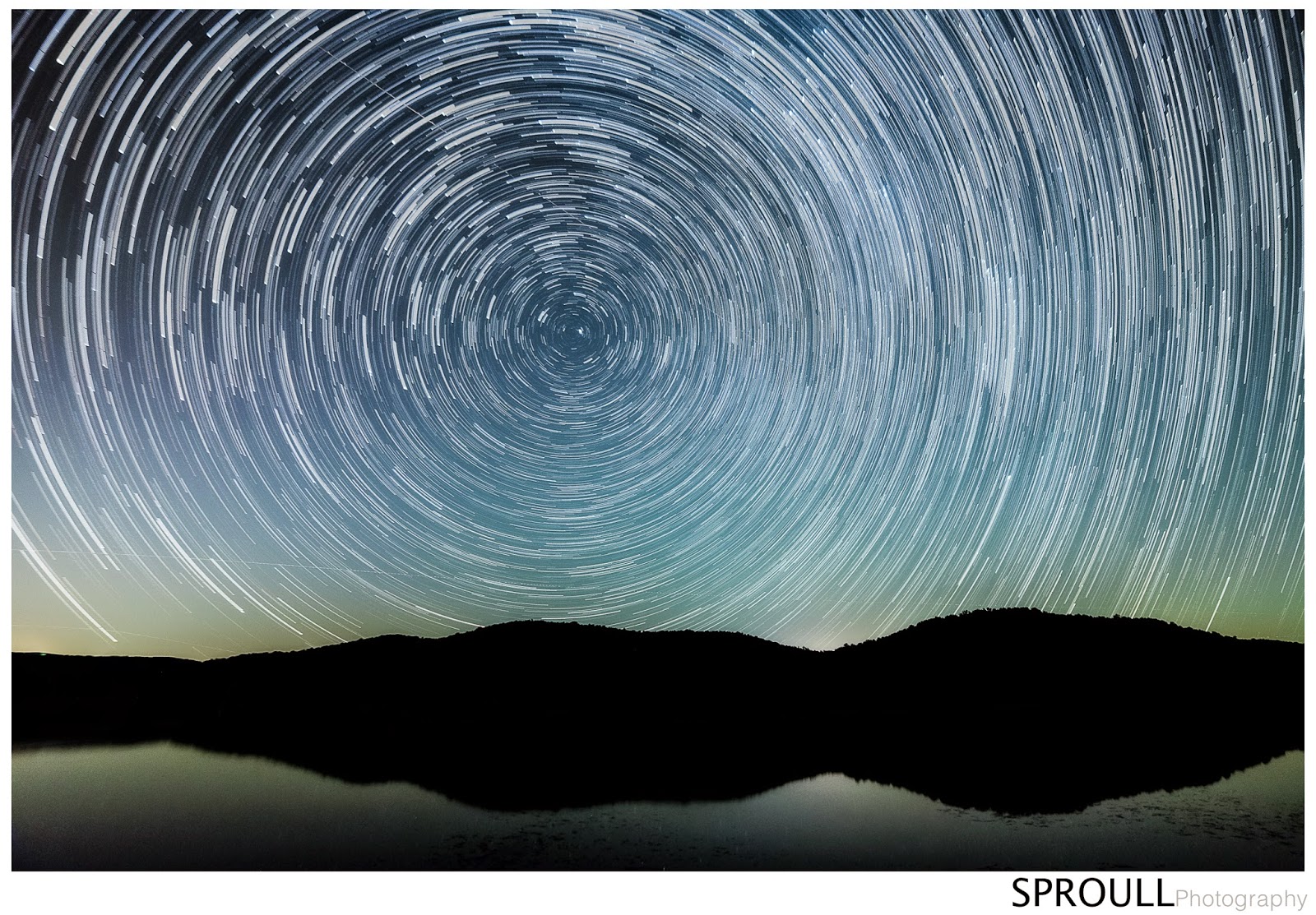 Lessons Learned: I should have used a 15 or 20 sec shutter speed to reduce movement in the starts towards the outer extremities - see how 'thick' the star trails are on the left side?

On the morning of my last day in Huntsville I got up at 5am CT and drove up the 1,600ft mountain to Monte Sano State Park. It was very dark, but I had a good idea where I wanted to go. The park didn't open until 7am so I was a little concerned I wasn't going to be able to watch the sunrise from the lookout point. However, the main park didn't have any gates, but I did have to park a few hundred yards from the lookout parking lot because it was gated. After unpacking my gear and getting the tripod set up, I patiently waited for the show to begin - it was about 1 hour until sunrise. Nearly the entire sky had cloud cover except a sliver near the eastern horizon. Just before the sun crested the horizon it painted the bottom of the clouds with vivid colors. See the Instagram embed below. Here are the settings I used:
Nikon D800 with Nikon 24-70mm f/2.8
1.6 sec, f/18, iso100 @ 38mm

Moments before sunrise This image was taken a few minutes prior to the other sunrise image I posted a few days back. The sun was casting these beautiful, vibrant colors on the bottom side of the clouds. The sky went through some amazing transformations that morning :) #montesano #mountains #sunrise #landscapephotography #huntsville #photography #nikon
A photo posted by Stephen Sproull (@stephensproull) on Oct 10, 2014 at 6:48am PDT


About 15 minutes later, the sun poked through the clouds and beamed the side of the mountain. I love the sense of depth that the fog adds to the lower right portion of the image. For those of you who don't know, using a small aperture (f/22 in this case) gives the starburst effect to the sun piercing the clouds. It has the same effect on pretty much any light source - just a little trick to keep in mind. Here are the settings I used:
Nikon D800 with Nikon 24-70mm f/2.8
0.5 sec, f/22, iso100 @ 38mm


This is why you should force yourself to witness a sunrise every now and then :) While in Huntsville, AL for work I got up at 5am and drove up to the top of Monte Sano State Park just east of downtown Huntsville. The park was closed so I couldn't drive to the lookout point - I had to walk. It was well worth the effort! The morning sun peeked through the heavy clouds for a few brief moments and it was gorgeous! #montesano #mountains #sunrise #landscapephotography #huntsville #photography #nikon
A photo posted by Stephen Sproull (@stephensproull) on Oct 10, 2014 at 6:07am PDT


I hope you enjoyed the blog. Thanks for stopping by. "Like" and subscribe if you want to stay in the loop with future posts.